Our apartment is in Victoria Mills, a development of renovated historic mills and newbuild, between the river Aire and the Leeds and Liverpool canal. It's not exactly a gated community, but it is sufficiently security conscious that access to either of these is not as easy as the map might suggest, but after a few wrong choices yesterday morning we found our way to the canal and almost immediately we were within the World Heritage site of Saltaire village.

Our destination was the Shipley Glen Tramway, a cable-hauled tramway run by volunteers, and only open on Sunday afternoons - so we turned away from Salt's Mill and through Roberts Park, to the bottom station of the tramway. There are two canopied tramcars, one red one blue, and as one rises, the other descends. As we rode up the wooded hillside, the voice of one of the volunteer staff behind me asked: "Did we all watch the tennis last night?" and

durham_rambler admitted that he had. (My impression is that he was not the only person who had watched, and I was not the only one who had not). From the upper station it's a short walk to a country park, but we didn't really investigate this: we had just come for the ride, so after a drink and a sit-down in the pub, we returned to the tramway, and back down to the park.

This time instead of skirting the park, we went straight through the middle, to the bandstand (where people in 'Yorkshire Choral Group' - or something close to that - were massing) and the statue opposite, which is, of course, of Titus Salt, erected to mark the centenary of his birth. If the light had been favourable, I might have put some effort into taling his portrait, but as it was what caught by eye were the plaques on the sides of the plinth. On one side was a splendidly horned 'Angora goat' and on the other this - as the label says - 'Alpaca goat': 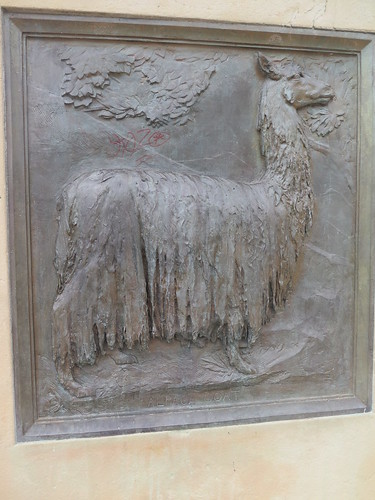 This was unexpected, but makes sense: these magnificent mills were all about the textles. ( Collapse ) This entry cross-posted from Dreamwidth: comments always welcome, at either location.
Collapse