After Sunday's walk to Saltaire my knee was complaining but still functioning. We wanted to spend the day exploring Saltaire village. A major part of my plan for this holiday is to remind myself, by gentle increments, how walking works, so we walked straight along the road to Salt's Mill, and straight past it, heading for the Victoria Hall, to which the Tourist Office has been relocated. "Relocated" means "replaced by a couple of racks of leaflets" but fortunately one of those leaflets was a map of the village and suggested tour - which we did backwards, because we could.

We lunched at the Terrace, a deeply French bistro on the Shipley Road - to the extent that the ladies' had one of those soaps shaped like an outsized egg impaled on a metal bar above the handbasin. I was entirely charmed, and my fish soup was good too (and would probably have served two less greedy people).

The plan was to call in at Salt's Mill on our return, for a comfort break and such refreshment and bookshop as tempted us. But it is not currently open on Mondays, so there was no chance to recuperate before following the canal home, and it didn't seem too far at all.

Nonetheless, yesterday we decided to do something different, and went to Skipton. Outbound, we took the scenic route, driving up into the clouds - which turned into mist as we rose into them, and followed us down in the form of rain on the other side. Skipton, like Saltaire, is on the Leeds and Liverpool Canal, and we took a short - half hour - cruise along it. Pennine Cruisers name their boats in pairs: Rosie & Jim, Jack & Jill, Bill & Ben, but we were on board Leo, eight human passengers and two dogs (one of which was no trouble at all, and rather sweet). Pity about the rain, but we enjoyed the trip, and walked a little along the route we had taken, afterwards.

Today was unexpectedly sunny, and we went to Hebden Bridge (over the moors, past Haworth) and had fun visiting actual shops - I may have had more fun with this than

durham_rambler but he is very long-suffering, and didn't complain. Here, too, there is interesting architecture, and mill chimneys, and both a river and a canal: 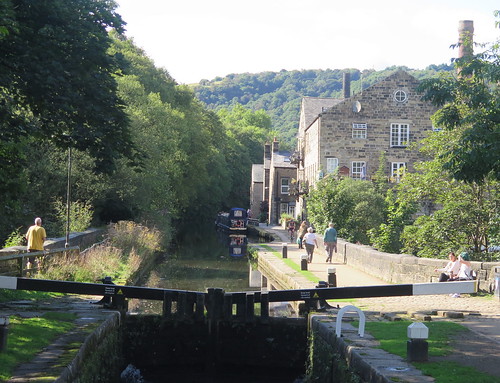 At this point, though you can't see it from the picture, is the aqueduct which carries the Rochdale Canal over the River Calder.

After this excitement, we returned to the café in the square for coffee and icecream:

durham_rambler checked his e-mail, I and listened to the busker (I recognised On both sides the Tweed and Beeswing) and it was all very mellow. This entry cross-posted from Dreamwidth: comments always welcome, at either location.
Collapse